When Chanel unveiled their 2015/2016 Métiers d’Art collection on December 1st 2015 in Rome, one shoe stood out above all others. The two-tone Chanel mules.

While talking about his collection to Suzy Menkes, Karl Lagerfeld let us in on a big revelation…

“I have made mules which Chanel never did”

And there we have it, Karl Lagerfeld has officially created Chanel’s first proper mule (in leather and suede!).

Season after season, Chanel inevitably makes a widespread hit that puts everyone from in the front row to back row in complete hysteria. The last time we saw this were the A/W 2015 Chanel slingbacks. A classic disguised as an it-shoe or a mule disguised as a must-have, Karl Lagerfeld knows how to create desire.

In fact, the entire 2015/2016 Paris in Rome collection oozed desire (and created it). And this new mule was entirely responsible for it. Barely hanging onto the models’ intricately lacy hosiery, the shoe shone.

What do we know about the mysterious 2016 Chanel mules? 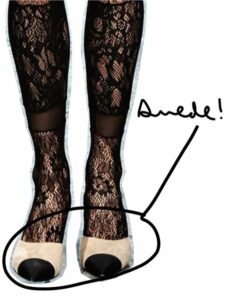 Lights, camera, action!… The 2015/2016 Métiers d’Art collection (along with the Chanel mules) is set to hit stores in June.

(photo from collage via Suzy Menkes)